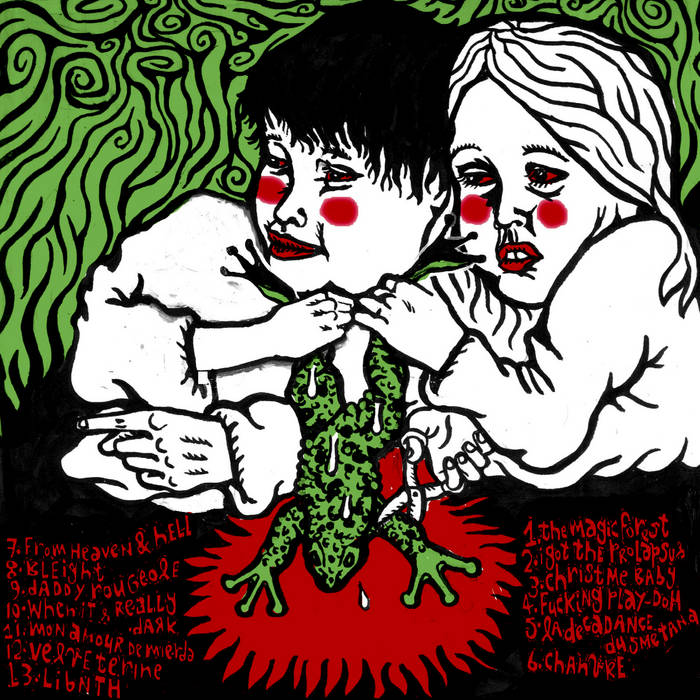 Alex ~~Art speaks for itself, I just can recommend it for those who seek mind expanding sound landscapes in magic realms~~ Favorite track: moN amouR De mierda (feat. REMON CHAMBI).


"First of all, a great psychedelic layout featuring artwork by Mathieu Desjardins - the front cover shows two wicked children on their way to amputate the leg of an oozing frog - and I suspect it's a bufo alvarius, judging from the content of this cd. Sure Andreas Marchal/Peter Percept (he's also been active as Frog Pocket, see the AFE back catalogue) has some lysergic plug in stuck somewhere. "Pilgrimini" sounds, to desperately try a description, like Residents recorded by Stock, Hausen & Walkman or People Like Us - then Aphex Twin shows up with his tank and throws some goofy rhythm here and there. This is some very out there, surrealistic collage of beats & bleeps, cheesy vintage key sounds and found voices scattered all over. Sometimes it's as subtle as a nursery rhyme, sometimes it's hangover-heavy. This is the typical cd I end up liking though I don't really like it, mostly because I boast of good taste. But come on, how can you lose with titles like "I got the prolapsus", "Christ me baby" or, better still, "Mon amour de mierda" (best track, by the way)? Be prepared for indigestion and foul breath after listening, though." (CHAIN D.L.K. / Eugenio Maggi / aug. the 30st, 2003)


THIS RECORD was first RELEASED in 2002 by AFE RECORDS (ITALY) -

"Most of the tracks sound unnervingly hilarious and pleasantly disturbing at the same time, and still you can dance to them!
The album cover may also help you to get the right picture of the music: weird and wacky like a serial killer wearing a Barry White mask..." (AFE / Andrea Marutti / sept 2002)

Bandcamp Daily  your guide to the world of Bandcamp

Featuring appearances from Kari Faux, Bluestaeb and and interview with NY-bred artist Wiki